Artwork of The Possible

Zhee Chatmon spent her teen years in the West Baltimore neighbourhood that she photographed for this issue of The Possible, but she hadn’t been back in a while. She was shocked by how much it had changed.

“It almost reminds me of how you have a loaf of bread and you think it’s still good, and then you move the first piece and the inside is mouldy,” she says. “At the border, it looks beautiful, but the minute you walk inward just a few feet, it’s culture shock. You think, how is this ugliness happening?”

At least part of the “how” is decades of car-centric planning: Chatmon’s images vividly illustrate what happens to a community when you plough an eight-lane highway right through it. Back in the 1950s and 60s, expressways were built around Druid Hill Park so that white commuters who’d moved out to the suburbs could get downtown quickly, with no thought for the Black and Jewish neighbourhoods who were cut offs from the park as a result. Today, these areas rank among Baltimore’s most disadvantaged, its worst for air pollution, cardiovascular disease, cancer and asthma, with high rates of vacant properties that create fertile conditions for drug-related crime.

The park that became an island

Like many US inner cities, West Baltimore has been blighted by car-centric planning and historic disinvestment. Now, its transportation planners want to right past wrongs by turning an eight-lane expressway into a ‘Complete Street’.
Read the story 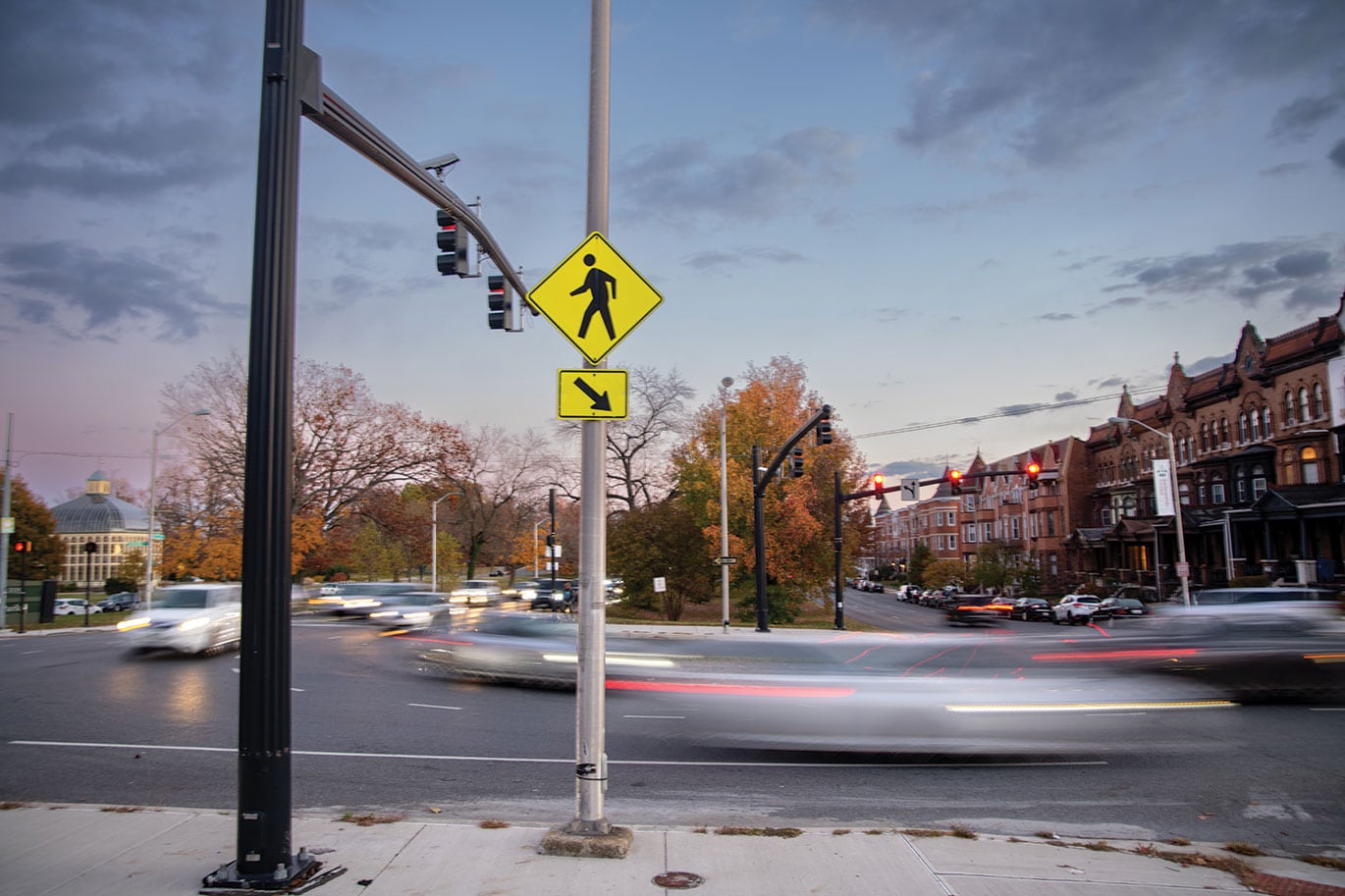 As always when she gets a commission, Chatmon’s first step was to take a walk and just look around. “I was thinking about what I could shoot that would show the busyness of this intersection, the separation of this beautiful park from the people that are literally a stone’s throw away, the difference in just a few blocks.”

What struck her was how much more overt the decline and neglect had become. “I know things happen — that people sell drugs, that people live in situations where they are depressed, that poverty can manifest itself in lots of different ways. But I’ve never just been right in the middle of it. So when I was walking through the neighbourhood and witnessing some of the things that were happening in broad daylight, it was quite an experience. I just had to pause for a minute.”

"When I was walking through the neighbourhood and witnessing some of the things that were happening in broad daylight, it was quite an experience. I just had to pause for a minute"

She felt a range of emotions: sadness, anger that things had been allowed to get this bad — and also fear. “I had a moment where I was photographing a building and I looked up and I was surrounded on all sides by folks who wanted to know who I was and what the hell I was doing. I thought, ‘maybe if I talk to you about this, something will register’.”

Chatmon hadn’t been aware of the transportation department’s plans to slow the traffic and reallocate space to walking and cycling, and neither were people she encountered in the neighbourhood that day. “Immediately they jumped in and said ‘you’re absolutely right’ and it was a whole dialogue, like ‘yeah that intersection is treacherous, we can’t even get over there’. But I guess they just didn’t feel empowered to do anything about it, or just didn’t feel like it was on anybody’s radar. I think they were happy to hear that somebody cared. It ended up being a good conversation, but they were definitely concerned about my presence.”

It was as a small child at gatherings of her large extended family that Chatmon first realized the impact that someone wielding a camera could have. “We didn’t have much money growing up and photographs were a big deal. We’d be at a relative’s house and out would come the boxes of photographs, and then would come the exchange of information. I would just sit and marvel at how powerful images are and the kind of emotions that they would evoke. And then it would be the pat-down before you leave to make sure that no one took anybody’s photos, lovingly and jokingly but seriously. Whatever was happening, it was a beautiful come-together moment. I remember thinking that I wanted to be the person who did the thing that made people feel like that. This gift of freezing time just seemed like such a superpower.”

Her desire to be behind the lens never faded, but she took a meandering path. “My mom was ill when I was young and we experienced some really rough times, so a lot of focus just went onto survival. I had a younger brother and I needed to help earn money.” In 1989, she ended up dropping out of college and making her part-time childcare job into a full-time one. It wasn’t until a conversation more than a decade later with the woman who would become her wife that Chatmon thought seriously about pursuing her dream once more. “She discovered some Honor Roll certificates and pins and things from college and asked, ‘what happened here?’ I told her and she said you need to go back and you need to finish. So with her support, which was amazing, I did.” In 2008, she graduated with a degree in fine art and she has been working as a photographer ever since. An initial specialism in maternity and childbirth has broadened out into portraiture, event photography and — her greatest passion — street photography.

"I remember thinking that I wanted to be the person who did the thing that made people feel like that. This gift of freezing time just seemed like such a superpower"

This kind of documentary work is where Chatmon’s heart lies. She is attracted to the figure of the “griot” in West African culture — a storyteller, historian and repository of oral tradition, often a poet or musician. “That is who I wanted to be with photographs: the person with the box of photos has the stories. I figured I could turn that role into something visual by capturing these kinds of images.”

In West Baltimore on that freezing November day, she found plenty of visual evidence of how the expressway was negatively affecting the area and the people who lived there. One of her favourite shots is the row of houses in various states of occupation, the upper storeys in sunlight, the street entrances in deep shadow. Then there was the beaten-up “Parkview” sign, initial letter askew: “That was just a gift to illustrate the energy of the area.” She was wrapping up when she saw the young bikers, who would become the subject of her stand-out shot. “They were trying to take their bikes into the park and they had to navigate this intersection. I watched them try to get across that street and I was like, wow, well here we are — exactly what the story is talking about.”

Artwork of The Possible | Issue 08