In large, less urbanized countries with underdeveloped healthcare infrastructure, a decentralized model with telemedicine at its heart will be essential for expanding access. Here, there is arguably an even greater opportunity to build digital services from scratch, unencumbered by legacy infrastructure or systems. A Philips study of global healthcare systems found that emerging economies are leading the way — it identified China, Saudi Arabia, India and Russia as forerunners in the use and adoption of digital health technologies to plug the growing gap between existing provision and rising demand.[1] “In rapidly growing economies, there’s more expectation of healthcare,” says Simon Kydd at WSP. “Where 20 years ago, somebody would have been prepared to travel 50 or 100 miles to go and see a GP, now they expect that service on the doorstep.”

Main article: the future of healthcare

Building physical infrastructure such as hospitals and roads is a relatively slow process, far outstripped by the proliferation of mobile devices and networks. Africa has just nine hospital beds per 10,000 people (compared to 62 in Europe),[2] but a mobile phone penetration rate of 44%. By 2025, it is predicted that 66% of the population will have a smartphone and 39% will use the mobile internet.[3]

“Improving access to healthcare in Africa is a massive task,” says Laura Swanepoel, office director at WSP in Johannesburg. “Many remote areas are well populated, but access is severely limited or lacking entirely.” Meanwhile, major hospitals in urban centres are struggling to meet demand as people move to cities. Just as elsewhere, the rate of non-communicable diseases is rising, alongside a high incidence of diseases such as HIV, malaria and tuberculosis and two-thirds of maternal deaths globally.[4]

The future of healthcare in Africa isn’t about overlaying a Western template, Swanepoel stresses. “Africa has major pipelines of wealth and the capacity to deliver amazing projects, but at the same time, there are communities where the whole plan needs to look a little bit different.”

“In Africa, innovation is about balance — it's about the approach rather than the materials or technologies. It’s about thinking what will suit a specific community best”

Supplies in the sky 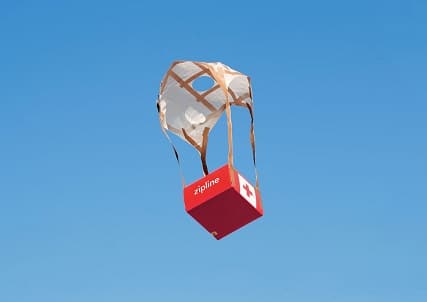 Drones are already delivering medical supplies in Rwanda, Ghana and Tanzania, and testing is underway in Malawi and South Africa. As of May 2019, more than 65% of blood deliveries in Rwanda, outside Kigali, were flown in by drones operated by San Francisco-based company Zipline (above). “This technology is growing very fast in Africa,” says WSP’s Jabulile Nhlapo. “At the moment, it’s just one-way delivery so the drone will drop off the package but not land, but they’re developing it for back-and-forth deliveries.” That means hospitals and clinics will need launching, landing and charging facilities, as well as airport-style control systems linked to building management systems, says Nhlapo. “It’s only a matter of time before this technology becomes part of standard medical practice, and it’s really going to change how we look at healthcare facilities.”

“Natural disasters are the new norm. We have to look 50 years ahead to design for this ever-changing environment”

Mobile technology and drones could support a decentralized model, connecting small clinics to expertise in larger centres. For example, a telemedicine hub at the new Middelburg District Hospital will extend its reach far beyond the immediate catchment, says Jabulile Nhlapo, mechanical engineer at WSP: “Someone sitting in a primary healthcare facility in the Eastern Cape should be able to easily communicate with a tertiary institute to get advice on a particular case or for consultations.”

Lead architect Sanele Mwelase at Geyser Hahn believes design norms need to change: “Patient comfort comes first, but we need to reduce the services needed to run the hospital,” he says. “This means not only the building shell, but the medical equipment. Water scarcity will stop a hospital, but healthcare cannot go offline. The benefits of maintenance-free, zero-emission buildings could be absolutely critical in the medical sector.” 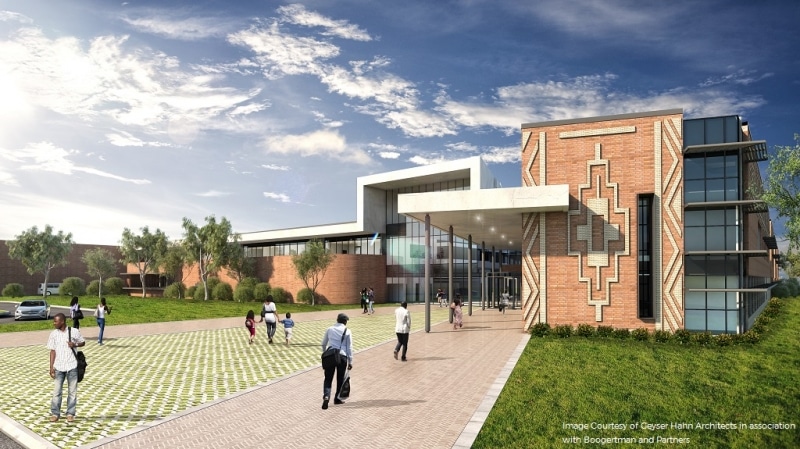 The new Middelburg District Hospital in Mpumalanga, South Africa will initially have 220 beds, but can expand to 350 as the population grows. WSP’s multidisciplinary team specified energy-efficient lighting and low-energy services, as well as water meters to help monitor usage and identify leaks. Here, sustainable design is essential for resilience, says WSP’s Laura Swanepoel. “In many parts of Africa, there are major issues with water and power. That makes the case for green building practices much stronger so that healthcare facilities can be self-sufficient in the event of an outage. The upfront cost may be a little bit higher, but the return on investment is quick and easy to prove.”

This article appeared in The Possible issue 06, as part of a longer feature on the future of healthcare