They’re fragile units, the teams that come together for a short time to design and construct our built environment — regularly forced apart by egos, power struggles and even the technology that’s supposed to bring them together. Software tools such as building information modelling (BIM) are supposed to make collaboration easier, but they also exacerbate tensions around intellectual property and liability for failures, and threaten to overturn established power relations. Meanwhile, projects are becoming vast, global endeavours, often designed by networks of professionals around the world who may never meet in person. So what does all this mean for group dynamics and individual job satisfaction? Psychotherapist Naomi Shragai puts the construction industry on the couch …

“A masterpiece without a genius” is how Rem Koolhaas describes the Rockefeller Center in his book, Delirious New York. The description neatly summarizes the multitude of talents that contribute to buildings, from their conception to completion.

But as building projects have grown in scale and complexity, understanding what underpins successful collaboration has become more valuable than ever. While much attention is paid to the systems and procedures involved in the practice of design and construction, much less thought is given to the vital interpersonal relationships within these diverse teams.

For people bring much more than their professional expertise to the table. Teams comprise of individuals with their own psychologies, ambitions, emotions and interpersonal conflicts, their unique ways of making decisions, taking risks and tolerating complexity and uncertainty — which is why collaboration is potentially such a messy affair.

Collaboration can be successful as long as three factors are in place, according to David Archer, partner at consultancy Socia, which specializes in helping organizations with collaboration. The first involves the governance arrangements, including the legal contracts, which spell out accountability. The second is about having the correct operational process between parties. The last, and most important, is to ensure the right behaviour.

From The Possible, issue 02

“This is like a three-legged stool,” Archer says. “If you have all three, then it’s stable on rough ground. If you pull one of those legs away, then it falls over. And often what we see is that people spend a lot of time on governance, quite a lot of time on process or systems, and not enough on behaviour. And that’s where the points of conflict often happen.”

One reason why conflict can arise is that projects, by their nature, start out as transactional relationships, where there is a clear and predictable agreement about what is expected. As building projects become increasingly complex, such relationships cease to be effective because changing economic and other factors force team members to adapt to new circumstances. “All the things you could have written into the contract will need to be changed, so you need a relationship which is much more symbiotic in order to deal with uncertainty,” says Archer.

In symbiotic relationships, individuals are mutually dependent on one another. This involves tolerating the varied stresses that such relationships inevitably bring. Issues of trust, dealing with conflicts and working with diversity become crucial. Those who are comfortable with dependency will feel more able to delegate and compromise. People who are anxious about it because they fear, often irrationally, that others will let them down, will struggle in symbiotic relationships. At the opposite extreme, those with more passive personalities, who are overly dependent, may rely too much on colleagues to get the job done.

There is a danger that such passivity, and an over-willingness to compromise, can be confused with collaboration — a point that Andrew Pressman reflects on in his book, Designing Relationships: The Art of Collaboration in Architecture. “Collaboration shouldn’t be compromise,” he writes. “Compromise — the antithesis of synergy — will generally undermine the good ideas of a project and make its experience banal.”

Tensions are an inevitable part of collaboration and, if well managed, often lead to creative solutions. Knowing when to compromise and when to hold steadfast to one’s views is essential, not only to innovate but also to prevent “groupthink”. People should ask themselves: “Am I giving in simply to avoid disagreements, or is this for the good of the project?”

This is a very pertinent question in construction, where strong personalities and opinions are the norm. Collaboration can be particularly difficult for architects, according to one principal from a leading practice. “In architecture we are all trained to work alone,” he says. “Everybody is thinking about their credit, their ego. It’s very personal. When you’re collaborating you can’t bring that expectation to large projects.

“Solving problems jointly takes creativity and courage. It means washing your dirty linen in public. It means asking for help when you need it, and offering it where you can"

“If you have individuals working for a team where it’s important to have personal recognition, there will be a lot of conflicts if they have that need for validation all the time. But if the project comes out well, and it makes the office look good, then we should all be happy.”

This is an important point — as Pressman points out, it can pay off to nurse an ego or two on a creative project. “A degree of narcissism, or confidence and even arrogance, helps to innovate and transcend mediocrity.”

Yet when collaboration is undermined, either by a silo mentality, a need for control or a lack of understanding of other people’s positions, the project will suffer.

Archer believes that a reluctance to share control is a significant factor that can undermine collaboration — particularly as project teams become dispersed around the globe. “In the construction world, the biggest factor in sharing control is sharing risk,” he says. “I know if I have control of risks I could manage them. To have to share control with someone who may come from a different organization, different culture, maybe speaks a different language — am I actually putting myself at risk in sharing control with them?”

One senior architect describes how an inability to share control with a construction team led to friction on a recent project. Again, the problems tended to revolve around authorship and ownership of risk: “The people working on it now in construction, they forget where it originated and it becomes their project,” he says. “And there’s a huge control thing because they weren’t around when the first ideas were discussed and developed.

“The way they gain authorship is to gain control of information, like making decisions during construction and not telling anyone else.”

There are myriad other reasons why tension might explode into open conflict on a construction project. Archer points out that different members of the team may favour different outcomes: “In a typical construction project the various parties will have different priorities. Some are completely time-driven, for some it’s quality of customer care and some are very focused on cost.” There may also be conflicts over capability, he adds, with one party doubting the ability of another.

“If the leader is perceived as someone who loses their temper if someone takes risks and makes a mistake, that is obviously going to inhibit collaboration"

Such a climate is less likely to foster collaboration than anxiety — which can have dire consequences of its own. “Anxiety in a team situation can cause people to act impulsively, or at the other extreme, freeze or clam up,” says Pressman. “The impulsive end of the spectrum can lead to an overly competitive situation whereas the clam-up response may bring the task to an abrupt halt.”

Individuals who have difficulty tolerating complexity often defend against their anxiety by simplifying or diminishing a problem. By viewing a situation as either all good or bad, or blaming others, they avoid feeling bad themselves. In extreme cases, they might even deny a problem exists. Although this reduces their anxiety, the danger is that reality becomes distorted and problems are not addressed.

So how can individual personalities and traits be harnessed for the greater good rather than the greater harm? One answer is to recognize that good teamwork supports individual freedoms and contributions, while maintaining the overall aims of the project.

The other side of this coin requires individuals to focus on the aims of the project and be willing to sacrifice some personal ambition. Understanding how others think and operate, sharing control and keeping one’s narcissism in check are all necessary for both leaders and team members. Much successful collaboration begins with self-awareness, and then developing a curiosity about other people.

In his book Collaborative Leadership: Building Relationships, Handling Conflict and Sharing Control, Archer describes how joint solutions are often more original and ambitious than those made within the comfort of one’s own professional boundaries. “Solving problems jointly takes creativity and courage,” he writes. “It means washing your dirty linen in public. It means asking for help when you need it, and offering it where you can. It’s easier by far to resort to carping and insularity. However, finding a joint solution speeds things up, and usually saves money.”

The secret life of design meetings 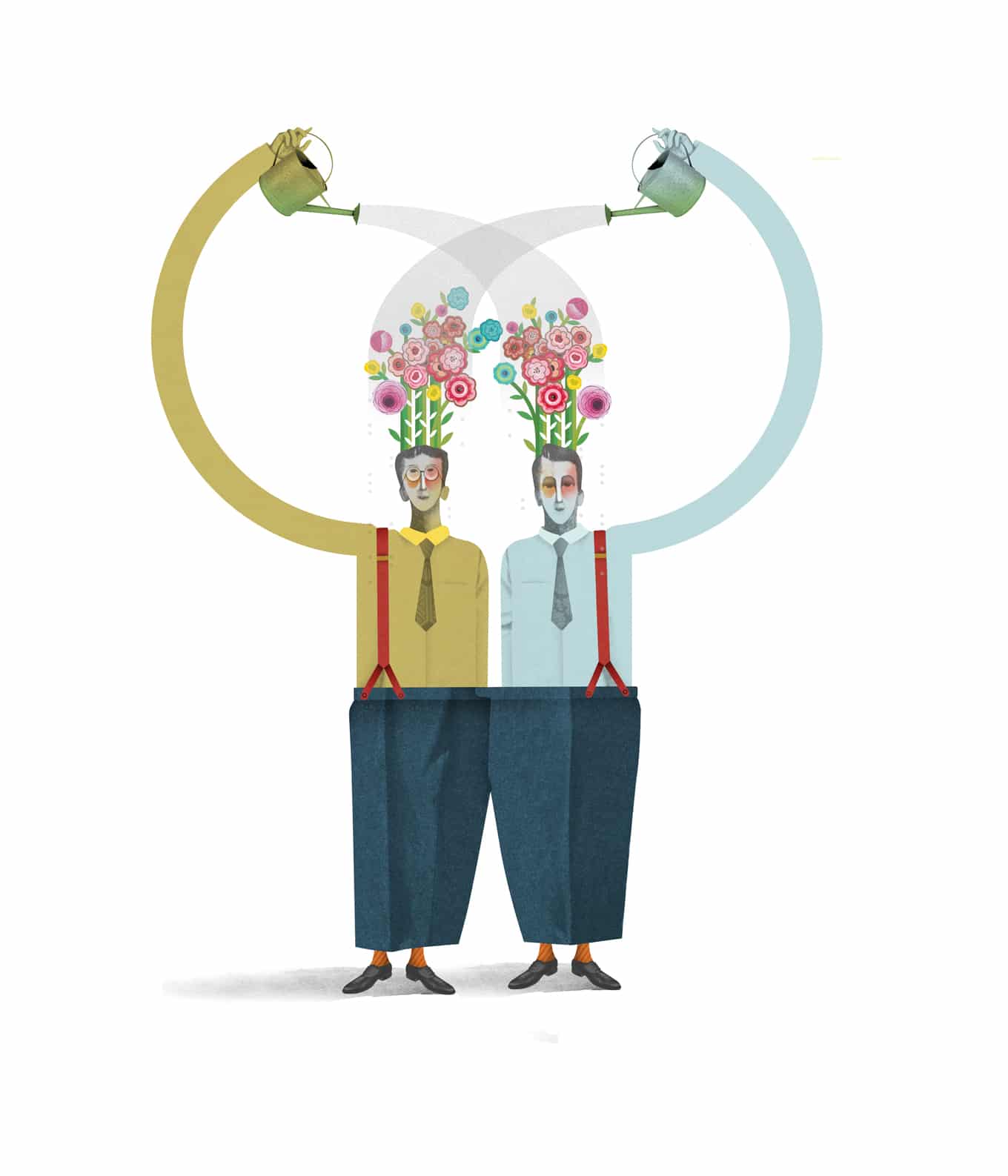 Leaders play a crucial role in creating a climate of collaboration. They communicate to their teams that it is safe to make mistakes and to express opposing views, and that their contributions will be acknowledged. Managers who fear conflict will inevitably undermine the collaborative process as problems are allowed to fester and grow, while they themselves lose the respect of the team.

Kerry Sulkowicz, a psychoanalyst and managing principal of New York’s Boswell Group, a consultancy that specializes in advising chief executives and boards, says that leaders should ideally act as participants while also being able to step back and observe what is happening in the group to make sure that it is productive. “If the leader is perceived as someone who loses their temper or is punitive if someone takes risks and makes a mistake, that is obviously going to inhibit collaboration, because in collaboration you have to take chances, open up, surface new ideas.”

Another important function of the leader, he adds, is to manage the strong feelings, disputes and power struggles in a team by allowing a certain amount of emotion to enter into discussions, but not so much as to overwhelm people — so they need to be able to distinguish between different types of friction. The leader must be mindful of the potential for groupthink and be open to the possibility that the minority view, or even a solitary opinion, might actually be the right answer.

It may be that, as Koolhaas says, you can build a masterpiece without a genius. But you do need to harness the talents of an array of individuals, with their various and complex personalities, ambitions and emotional needs, and to understand the true nature of their relationships with one another and the tensions inherent therein. That, it could be argued, is the really hard part.

‘A great team is one big unhappy family'

Be cautious of selecting more charismatic and seductive personalities. Recruit individuals whose skills are most suited for the project

No idea, even an apparently bad one, should be dismissed immediately, but considered, nurtured, and only then rejected or accepted

The group majority voice can suffocate the creative individual. People should be given space within a team as a prerequisite for creating a synergistic product

A great team could be characterized as one big unhappy family, meaning that tension in teams can be constructive, “as gasoline that fuels innovation”