No consideration of embodied carbon would be complete without acknowledging that the subject is plagued by trouble with definitions. This is primarily because embodied carbon cannot be measured directly. You cannot break concrete open and quantify the embodied carbon inside. Instead, it must be calculated or inferred from a knowledge of how and where a material was produced. To make matters worse, definitions overlap. So the embodied carbon of your car could once have been considered the operational carbon of the iron mine, steel plant and automobile factory that led to its existence. The different ways of both classifying and calculating embodied carbon mean that it is easy to muddle the pie charts of blame.

To set embodied carbon in its proper context, it is first necessary to separate “industry” from other sources. According to Sustainable Materials: With Both Eyes Open by Julian Allwood, around one-third of all our global CO2 emissions result from deforestation, decay and agriculture. The other two-thirds are energy or process-related. Of this, transport accounts for just under one-third, powering buildings another third, and industry just over one-third. Of industry, three-quarters of emissions can be said to become embodied — with steel and cement the biggest contributors. This means that, very roughly, around onequarter of all non-agricultural man-made CO2 emissions result from the manufacture of things. It follows from this that designers of the built environment can make a huge difference. Choose low-carbon solutions and you will eat away at that stubborn 25%. 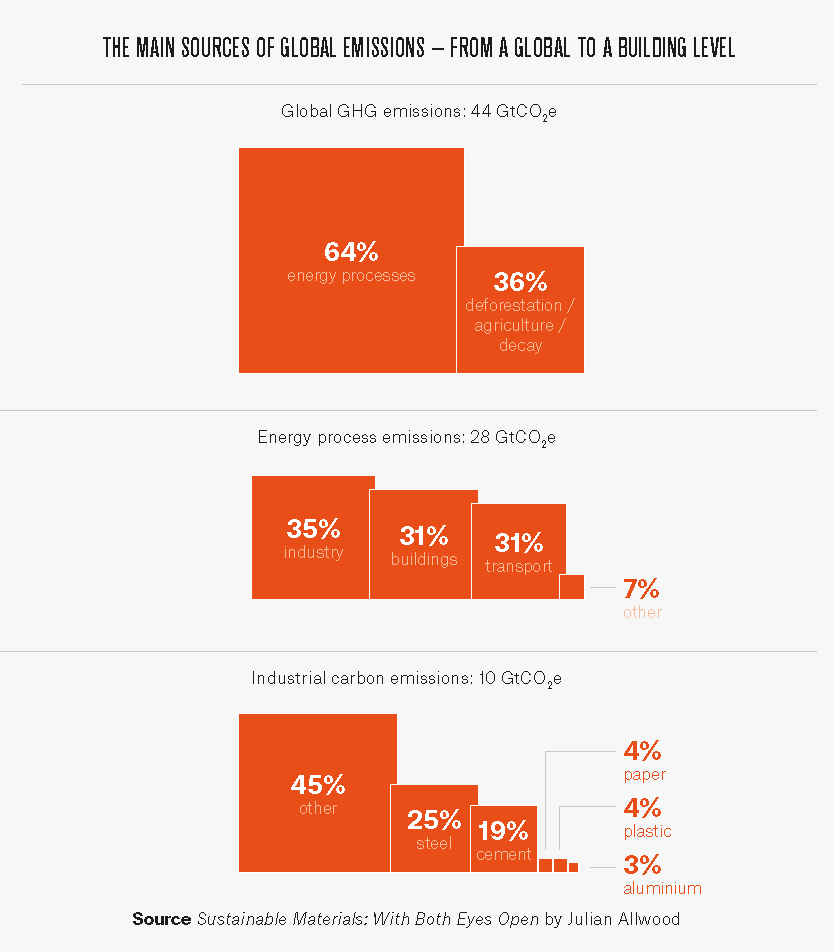 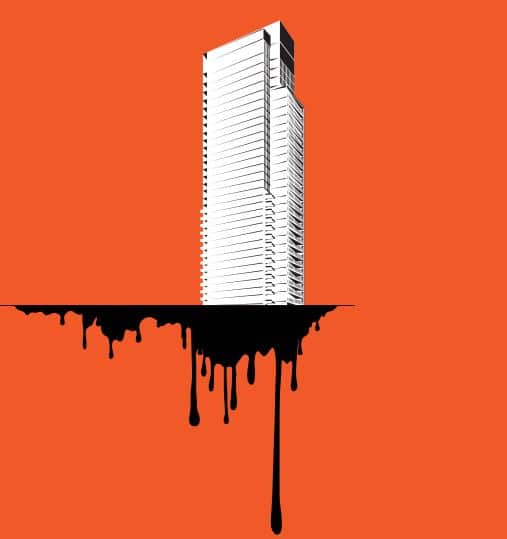 It also helps to consider embodied carbon in the context of a single building. “Today, most of a building’s carbon emissions result from operational energy,” says Sarah Buffaloe, sustainability lead at WSP in Washington DC. “So the industry has focused on more efficient equipment, investment in renewables and designing for reduced energy use. But even if a building reaches net-zero energy, that doesn’t mean it is net-zero carbon. All buildings start with a carbon deficit from the materials extracted, manufactured, delivered and installed.” This deficit might represent 20-50% of a building’s lifetime carbon footprint, depending on how it is used, and for how long. “As buildings become more operationally efficient, the balance between operational and embodied carbon will get more even. If a project team wants to claim true sustainability, the issue of embodied carbon will have to be more fully addressed.”

Obviously this will involve specifying materials with low embodied carbon. It sounds a simple enough goal, but again it is bedevilled by terminological variations. WSP’s Chris Pembridge says: “The choice of material for a building’s frame is probably the most significant decision, so it would be useful to have a figure for the embodied carbon value of a tonne of concrete versus a tonne of steel. The problem is that these figures tend to be produced by trade bodies — so who do you believe?”

"Even if a building reaches net-zero energy, that doesn’t mean it is net-zero carbon. All buildings start with a carbon deficit from the materials extracted, manufactured, delivered and installed" 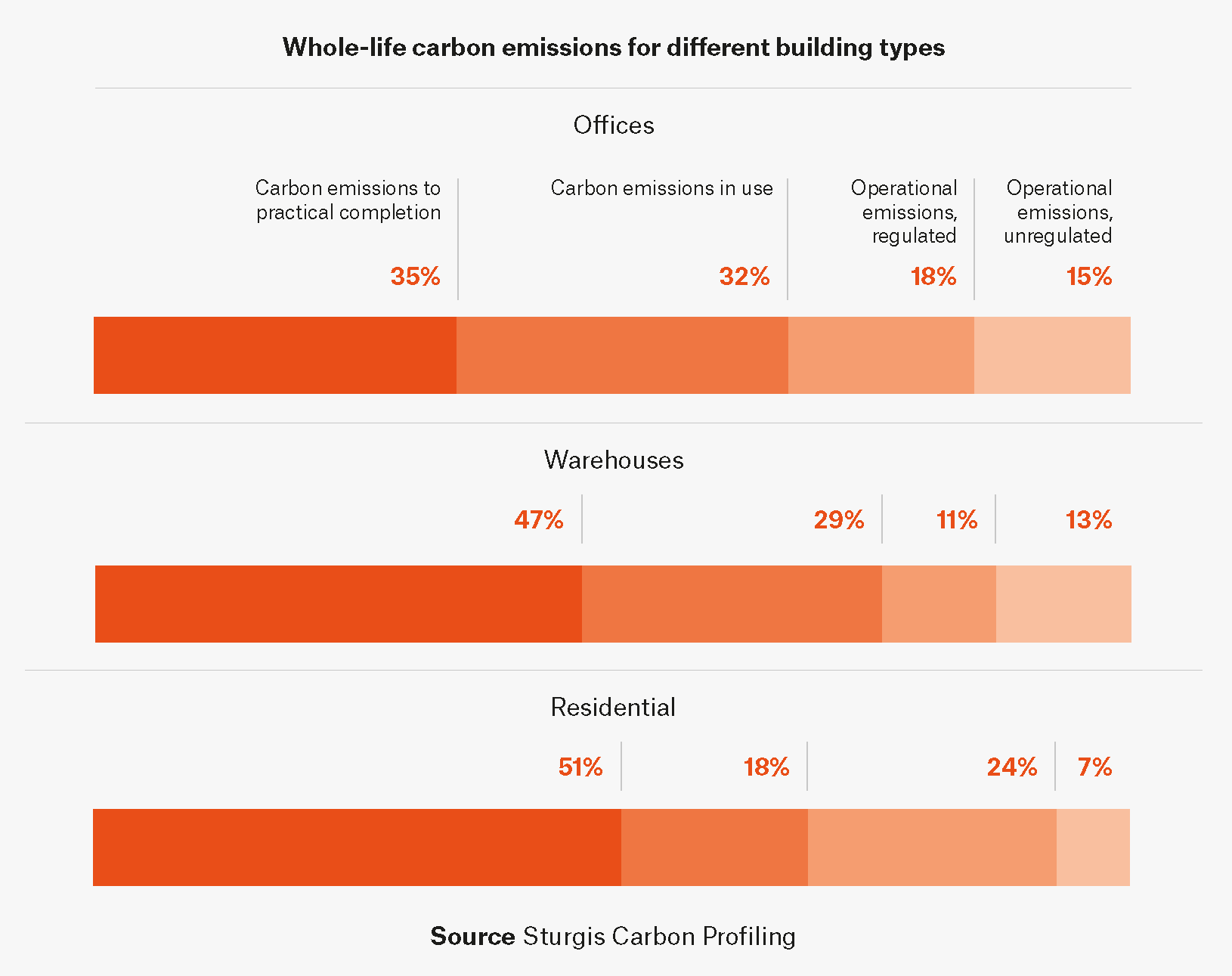 Google “embodied carbon of concrete” and you see what he means. There are a wealth of numbers produced by many different organizations, with estimates ranging from 75kgCO2e (carbon dioxide equivalent) per tonne to double or even triple that. The GaBi data platform gives a range of 80-130kgCO2e per tonne; the National Ready Mixed Concrete Association in the US provides a minimum figure of 100kgCO2e and a maximum of 260kgCO2e. All these figures could be true, says Pembridge, depending not only on the properties of the mix but on how its impact is calculated: “Does the calculation include transport from factory gate to the site? And where in the world and how efficiently was the material produced? It can make a big difference.”

Delve into the US green building standard LEED or its UK equivalent BREEAM, and you will find credits for using low embodied carbon components, and attempts to set useful boundaries. Among these are “scopes” 1, 2 and 3, established by the international carbon accounting tool the Greenhouse Gas Protocol, with scope 1 being emissions released directly from a producer’s factory, scope 2 including purchased electricity, and scope 3 also including supply chain emissions.

Valiant though such efforts are, they are far from perfect. If you are buying aluminium, does it really matter whether the producer used its own power supply (scope 1) or somebody else’s (scope 2)? It is how the power was produced that counts. Such boundary setting continues to challenge those who seek to standardize the subject of embodied carbon. Nevertheless, the quality of information is improving — in the UK, the Royal Institution of Chartered Surveyors’ Building Carbon Database is one of the best attempts to produce regularized, reliable and useful information. A further complication is that embodied carbon values inevitably change over time. As power grids decarbonize, the embodied carbon of products from manufacturers that use those grids will also fall — so constant updates will be essential.