“We will need to make and deploy batteries on an unprecedented scale, both to store green energy for when the sun isn’t shining or the wind isn’t blowing, and to power the many, many devices that will collect and process data in tomorrow’s smart cities”
Kevin Beauchamp

Over the coming decades, we need to transform our cities to meet our shared goal of keeping global warming to below 2°C. We broadly know what this will involve and where we want to get to. There is a consensus that we need to switch our power grids to renewable energy, electrify transport networks and buildings, and upgrade them to be smarter and more efficient in their energy use. We also need to transition to a circular economy, in which waste is eliminated and we can meet all of our needs by reusing or recycling existing resources. But therein lies the challenge: we can’t do the second until we have all of the materials we need to create the first. And there is a massive shortfall, particularly in the metals and minerals that are essential to the functioning of almost all green technologies. All of those metals and minerals will need to be extracted from the ground.

Take a typical electric car. It might look similar to a conventional model with an internal combustion engine, but it requires six times the mineral inputs — more copper and more manganese, but also significant amounts of lithium, nickel, cobalt and graphite, as well as rare earth metals. These are crucial for battery performance, and for the permanent magnets that drive electric motors.

Mining typically happens far outside urban areas, so it’s understandable that it’s mostly out of sight, out of mind for city dwellers. If people think about mining at all, they tend to imagine it as a dirty, dangerous, destructive industry that — like fossil fuels — must be scaled back if we are to meet our decarbonization goals. But the modern mineral supply chain is far removed from these images of the past, and the market’s ability to maintain supply in step with demand will have considerable implications for urban policy, and vice versa. Cities are already major consumers of the world’s minerals, and their extractive footprint is only set to expand, in both size and range. As demand is surging, there is a well-recognized disconnect with future supply, and it’s not yet clear how this will be resolved. 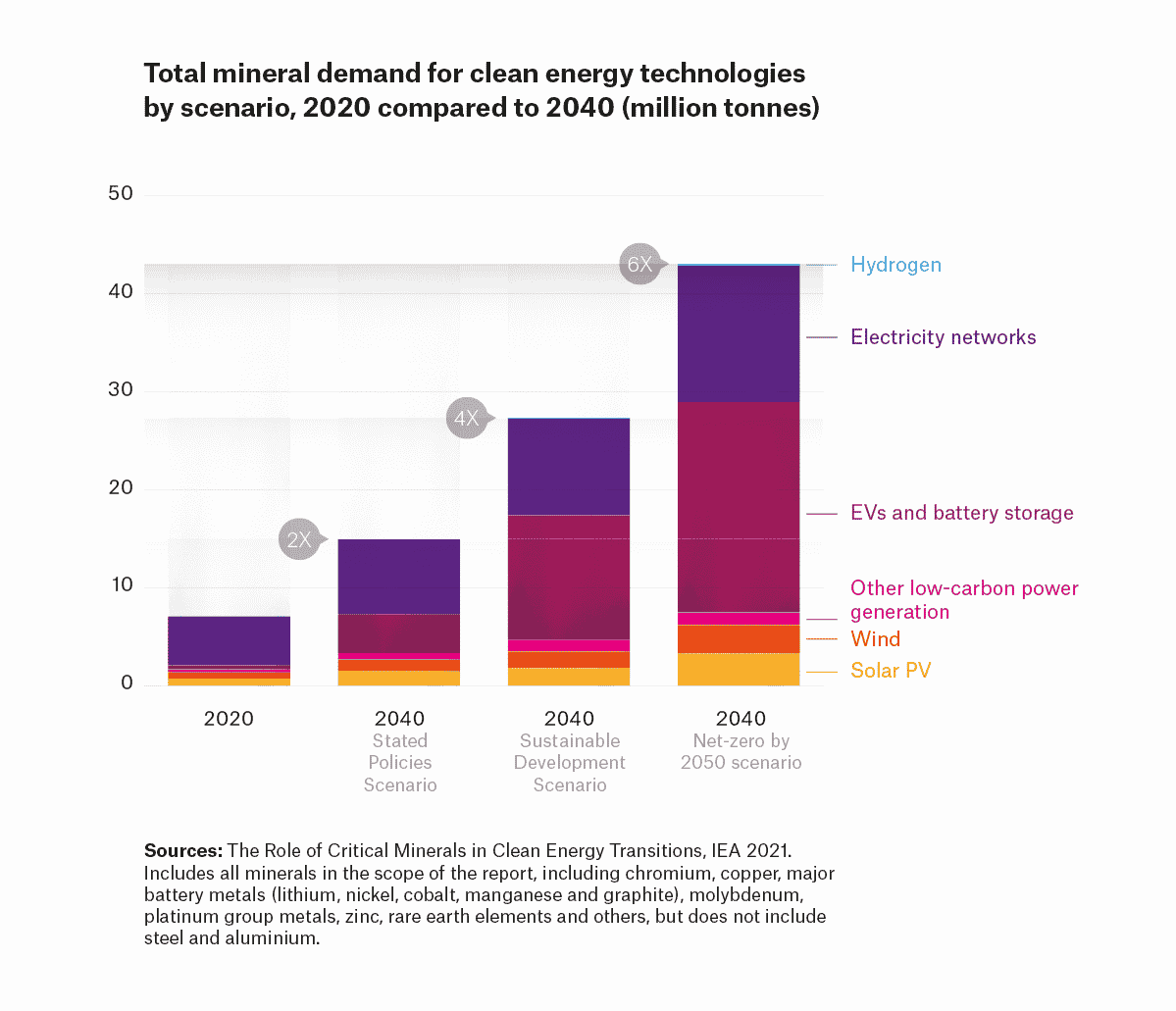 The growth in electric vehicles is far from the only factor driving global demand. The mineral resources that go into establishing an onshore wind plant are nine times greater than for a gas-fired power plant of equivalent capacity. For offshore wind, the multiplier is even higher. Solar photovoltaics use double the weight of copper per megawatt of generation, and also substantial amounts of silicon. Since 2010, there has been a 50% increase in the average amount of minerals needed for a new unit of energy generation as investment in renewables has grown. We will also need to make and deploy batteries on an unprecedented scale, both to store green energy for when the sun isn’t shining or the wind isn’t blowing, and to power the many, many devices that will collect and process data in tomorrow’s smart cities. According to the IEA, meeting the Paris Agreement goal of stabilizing global warming below 2°C would mean a quadrupling of mineral requirements for clean energy technologies by 2040. To reach net-zero globally by 2050, there would need to be six times as many mineral inputs in 2040 as there are today.

The mining industry is already under pressure to meet current demand for many minerals and it is not obvious that significant additional reserves and production capacity will be brought on line over the next few years. The supply crunch is causing concern for countries that are reliant on imports, and leading some manufacturers — notably Tesla — to consider investing directly in mining to secure their own supplies of battery minerals. There will undoubtedly need to be a many-fold increase in the supply of lithium and rare earth metals — though as current production is relatively modest, that’s imaginable. In fact, it may be more challenging to keep up with the growing demand for metals like copper and nickel — respectively the cornerstones of electricity-related technologies and stainless steel — which are already produced on a global scale.

"Do we continue to prioritize individual car ownership, or incentivize a shift to shared mobility? The consequences for resource use could be very significant"

The global mining industry is well aware of its role in the green transition, and mining companies are gearing up to provide the raw materials while reducing their own carbon footprint. As with many industries, perceptions of mining tend to be rooted in the past. The early days of mining were crude and had large, negative environmental impacts, earning the industry a reputation that has been hard to shake. But it’s also benefitted from incredible scrutiny over decades, driving much better performance on environmental, social and governance issues than many sectors that enjoy more favourable press. A modern mining operation bears as little resemblance to a 19th-century open pit as a modern industrial farm does to a small family farm. The mining companies that we work with are scaling up production, developing new reserves and investing to improve efficiency and transparency, while piloting technologies such as hydrogen-powered trucks, solar and wind installations and on-site carbon sequestration to meet net-zero targets.

However productive and sustainable mining can become, it cannot extract reserves that have not yet been discovered or developed. There is likely to be a shortfall in the supply of critical minerals in the years to come, and this is an issue that governments and the private sector will have to deal with. In an increasingly competitive market, it may well be possible for advanced economies to pay more to secure the minerals they need. But if we are going to halt global warming, and create a fairer, healthier world, we need clean, green technologies to be applied everywhere.

As cities will continue to consume the majority of minerals, the way they do that matters enormously. For example, many metals are already recycled, but we need to do better, particularly for rare earth elements that are used in such small quantities that extracting them for recycling wasn’t seen as worthwhile. Here, government or local policies could help to divert old consumer electronics from landfill so their components can be reused, and establish the infrastructure for recycling new waste streams such as spent EV batteries.

"Can we rethink life in cities to work within sustainable boundaries, rather than simply powering high-consumption lifestyles in a different way?"

There will also be key planning decisions that will affect the overall quantity of minerals required. In the coming era of autonomous vehicles, do we continue to prioritize individual car ownership, or do we incentivize a shift to shared mobility? The consequences for resource use — not to mention congestion — could be very significant. In the hotter, electrically powered cities of the future, could we reduce the overall level of battery capacity by designing efficient buildings that use passive cooling as much as possible? Above all, can we rethink life in cities to work within sustainable boundaries, rather than simply powering high-consumption lifestyles in a different way?

The success of the green transition will in some ways hinge on the mining industry as the primary producers of critical minerals, but also on how those minerals are deployed on the other side of the equation. Ultimately, they are a finite resource — another hard limit on the planet’s ability to sustain us. Integrated, clear-sighted thinking to join the dots between supply and demand will be invaluable as we navigate the challenges to come.