The Possible: Why did you decide to write this book now?

Bill Kerr: I’ve been working on the topic of talent migration for about two decades. Over time, the role of global talent has increased dramatically and some of the challenges faced by the US and other countries have also grown. The book was written to draw attention to those factors — unfortunately, the topic has become ever more pertinent now with the recent backlash against global integration.

TP: In a nutshell, how important is talent migration and why?

BK: Very important! Global talent has been a central driver for all of our economies and businesses and has many societal implications. One of the areas that it’s easiest to put into numbers is innovation. If you look at the US in 1975, about one in every 12 patents was created by an immigrant. Now that number is about one in 3.5. There has been particularly strong growth in more advanced sectors like heavy ICT or biotech, but also in traditional sectors like agriculture and mechanics. Immigrants are more likely to become entrepreneurs than natives in many countries around the world, and these forces help to propel economies forward, open up new businesses and create jobs. That’s something that touches on all of our lives.

The book also seeks to show where people can get hurt by global talent, whether it’s older tech workers trying to maintain their employment or the increasing inequality in our leading talent clusters. I argue that it is the “gift” of global talent, so I clearly believe, in the end, that it’s something we should cherish and celebrate, but I think we could do more to make sure that it’s shared more broadly.

TP: How can countries balance public opinion on controlling immigration with the danger that companies will relocate if they can’t bring in talent?

BK: I’d hope that we could find ourselves in a place where it’s not one or the other. This is not a book that advocates open borders. Only environments where people feel comfortable with how immigration is happening can really support the higher levels that businesses want and need. Once you get the immigration system operating in a way that really benefits people broadly, businesses will be able to get the talent they want. As one example, Australia is probably the most immigrant-heavy country among OECD-type economies and yet it controls its borders quite strictly.

TP: How will change as a result of automation and the fourth industrial revolution play into this?

BK: As technology evolves and many advanced economies, as well as China, experience ageing workforces, governments are going to be much more aggressive about bringing foreign talent into their countries. This is just getting started. Despite nationalism and populism and some of the backlash over programmes that are seeking to bring in foreign talent, we are starting to see ever more competition. People are saying, “Well, China has this programme, we should have this type of programme”.

How talent clusters: migration and innovation in the US 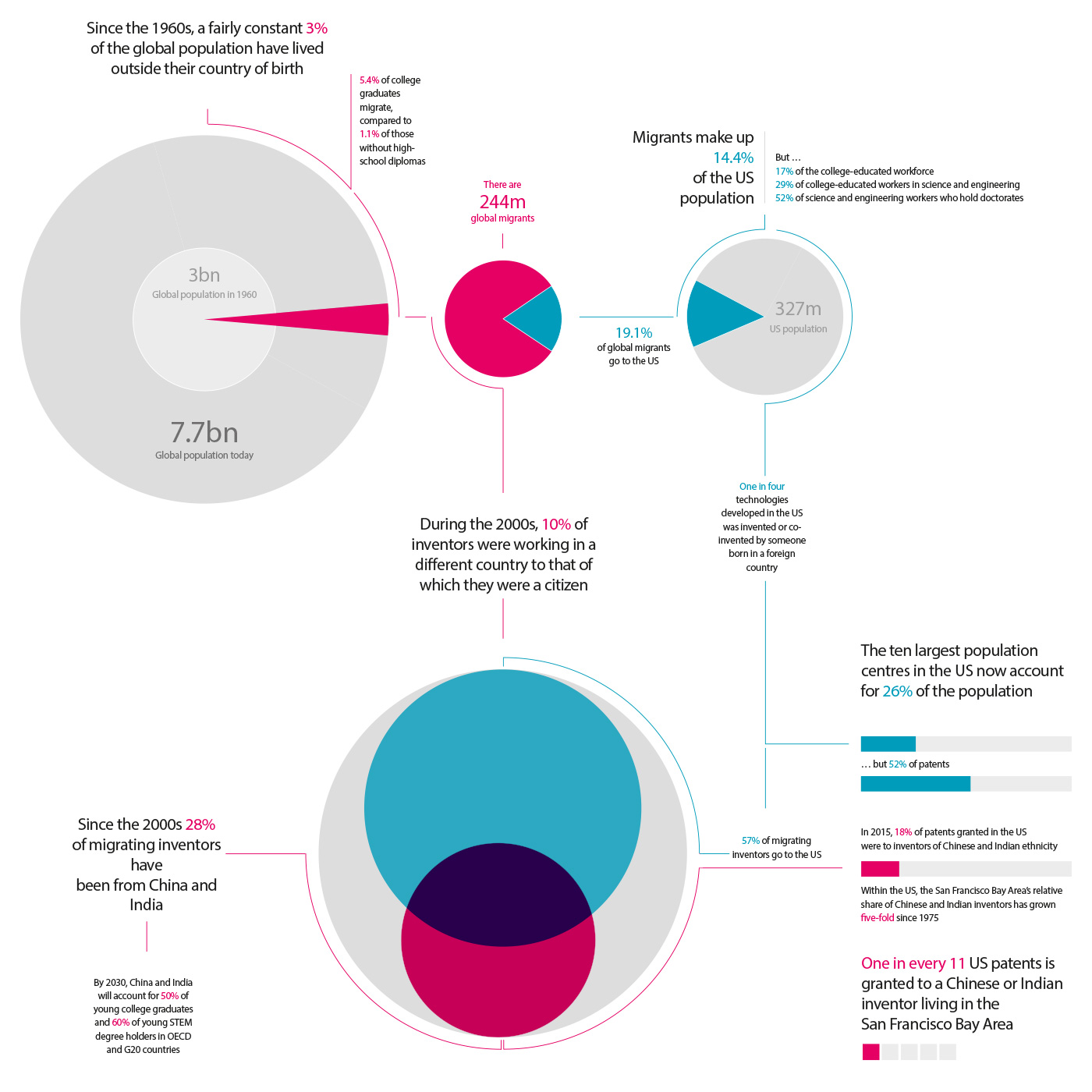 Source for all data  The Gift of Global Talent: How Migration Shapes Business, Economy & Society by William R Kerr. This graphic combines statistics from several sources to visualize the overall talent flow

TP: You make a number of policy recommendations about the immigration system at national level. What could cities or organizations do in the meantime to harness the benefits of global talent and retain this competitive advantage?

BK: Let’s begin with cities or regions. Migration is, for the most part, a national policy. But the way that people experience migration varies at the local level. Places differ dramatically in terms of how open they are to foreign talent. If a city leader is welcoming, that’s going to carry a strong message, just like if they are hostile in their rhetoric, it’s going to cast a big shadow over attracting talent.

The second part is, once somebody has made their way, are you able to keep them? Are they able to continue in your city or your region and prosper? That becomes a beacon to attract additional migration into your area. What can you do to build networks that extend to the places where people came from?

Companies have to think about several things. The first part is, whatever country you are in, you have to navigate the immigration system. That’s not something that comes naturally to all firms. If you are a Siemens or a Ford, you’ve already figured it out, but if you’re not one of those very large companies, it’s difficult to learn. But it’s a skill that you need in order to access the best talent. If it continues that migration systems become more difficult for businesses to navigate, then those that understand the rules will have an advantage.

Going beyond the system itself, it’s helpful to appreciate that global talent is not uniformly distributed in terms of where they want to live. It will be ever more concentrated in very vibrant clusters. You can certainly hire foreign talent into remote regions, but if you really want to participate, it’s important to be part of the leading centres where global talent wants to live. It’s important for domestic talent as well — in many countries, we’re seeing a movement of young talented people towards cities and a reshaping of business — but for global talent the trend is accentuated.

Beyond that, there’s an old saying: “A wise rabbit has three holes”. Increasingly you’re going to see companies distribute facilities across multiple countries, as a way of accessing talent in many different places and also as a hedge against the policies of any one government — something that will help balance out where you’re accessing talent from and the types of voices you’re hearing.

“Global talent is not uniformly distributed. It will be ever more concentrated in very vibrant clusters. If companies really want to participate, it’s important to be part of the leading centres”

TP: As clusters become more powerful, is the logical conclusion that talent and innovation will concentrate in just a few locations and others will become, effectively, deserts?

BK: Over the last 40 years there has been a process for ever greater concentration of innovative activity. There is some brake to that process: these places become hyper-expensive and there are limits to how much people want to live in bigger cities or more exclusive locations. Universities are always going to play an important role — they have a greater spatial distribution and are rather fixed in their locations. But I think that in ten years, we’ll be even more concentrated than we are now. So that is a concern.

Immigration can play a role in this. Some countries, like Canada, have regional visas, so a migrant has to work in a certain location for a period of time until they gain mobility rights. What you typically see, of course, is that once they have established their mobility, they migrate towards one of the leading cities for talent, but it helps spread innovation back out, at least for a while.

Then there are a number of efforts to push R&D-related work out into regional areas. In the US, this was highlighted with the Amazon HQ2 selection process. Amazon ultimately selected Washington DC and New York, two places doing just fine already. Amazon later ended its connect to New York, but the fact that it chose a city that was already in that upper echelon was a wake-up call that this is not a process that naturally corrects itself.

TP: How can places that aren’t currently a talent cluster develop from scratch and share these benefits?

BK: You have to begin with some recognition of your size and what you’re aspiring to. No matter what you do at the local level, you cannot make every rural place into the next Silicon Valley. You have to recognize that the concentration process creates a few unique places that are very important for a particular type of work, be it New York or London in finance or Berlin in the tech community.

Part of the benefit is that there are only a few of these places. You can’t expect that this will touch every place, but you can think what unique attributes you have that you could build upon. What are the special local traits? What does the university produce in terms of leading technologies or ideas? You can look at how well connected you are to nearby clusters and what can you do to be a part of that broader ecosystem.

TP: How can existing talent clusters be managed sustainably, so they’re not hampered by their own success? In the book, you say real estate is a key barrier — is that always inevitable?

BK: I’m going to start with the broader mandate. Talent clusters and the firms that are working in them need to be thinking much more about how they’re shaping a better world for everybody. It’s not hard to recognize that while the economic side of talent clusters may be sustainable, the political side has become unsustainable and that is going to require some deep attention.

Real estate is a challenging question. In the talent clusters, you can experience ever-rising demand, and it’s not surprising that people want to be a part of that environment. On the supply side, there are a lot of constraints on the overall building supply — take San Francisco and the Bay Area, where there’s a lot of water, a lot of mountains, a protected area — but people may artificially restrict the land supply even further, especially as the prices are going up. If you’re an existing homeowner or landlord, and the building capacity is increased quite extensively, that’s going to reduce the value of your property. Then you’ve got extra complications as people get wealthier — in talent clusters there are often people with extreme wealth who can buy up properties and create very substantial mega-homes so there’s less for other people. In the US, we’re starting to see presidential candidates making statements about correcting housing supply issues. I think we’re going to see more of those conversations in the next two years.

TP: How can cities and businesses win over the wider population and convince them of the benefits of global talent? How can they ensure that those benefits do spread out?

BK: I don’t know exactly how we’re going to pull this off, but the anti-immigrant rhetoric has got to stop. It is just so unhelpful and it causes such misunderstanding. If you look at Republican, Democrat, young, old, rich, poor, you’ll always find the majority of people in the US are supportive of expanding skilled migration. It doesn’t matter how you cut the slices: 57% of Trump voters are supportive of skilled migration. It’s clearly not working for us to yell about reforming all of the system at once — there’s too much at stake and we’re not making any headway. If we could somehow take the skilled migration part and get a quick victory, make it a better system so people inside and outside the talent clusters benefit, then that would be a good step forward. I don’t think there’s a magic way of framing the issue that will solve it, but if we could start with places that we agree upon and make some progress, then the other places will, hopefully, just become easier to talk about.

Bill Kerr is a professor at Harvard Business School and co-director of the school’s Managing the Future of Work initiative. His book, The Gift of Global Talent: How Migration Shapes Business, Economy & Society, is published by Stanford University Press