Frustration drives some people to anger, some to despair, and some to write manifestos. It is into this last bracket that the British-Israeli architect, researcher, writer, speaker and idealist Itai Palti falls. The Conscious Cities Manifesto he co-authored with neuroscience professor Moshe Bar in 2015 was born of frustration, he says — though he usually prefers to put a more optimistic spin on it.

“I think the manifesto came out of this realization that we have so much more potential to put humans at the centre of the design process, and that it’s not being actualized. As a profession, architecture can have a lot of positive social impact but in practice there’s sometimes a laziness and an arrogance about it. I guess I can say that because I’m speaking from within.”

For all Palti’s readiness to criticize his peers, his ideas seem to have struck a chord. Over the last four years, he has rallied many of them to his cause of science-informed, human-centred design, alongside a diverse group of scientists, researchers and technologists. Palti was not the first to spot the synergies between neuroscience and architecture — San Diego’s Academy of Neuroscience for Architecture (ANFA) was founded in 2003 — but in marrying it to the opportunities of smart cities, he’s tapped into the zeitgeist. The Conscious Cities movement resonates with an array of current concerns, from wellbeing and mental health to techno-optimism and our darker fears about the unseen agendas we are hardcoding into an AI-driven world. The first Conscious Cities conference in London in 2016 attracted about 80 people and featured a keynote from MIT’s Carlo Ratti; in 2019, there will be 15 different events in New York, Bangalore and Rome with 200 speakers and an expected audience of 2,000.

“A ‘conscious city’ is going to happen because that’s where technology is leading us. But technology has a way of guiding human behaviour to bad habits”

Neuroscience is the study of the brain and nervous system, though the broader definition encompasses human thoughts, emotions and behaviour. Using novel technologies such as virtual reality and portable brain mapping, it promises to show how aspects of cities or buildings contribute to health and wellbeing, and quantify and refine concepts such as productivity and quality of life. To that end, researchers have devised ingenious experiments to monitor stress levels as people walk through urban environments, for example, or measure how smartphones have damaged our ability to navigate street layouts.

The places that Palti wants to create are conscious in two ways. They would be designed with a social conscience, and they would be sentient — aware of and responsive to their inhabitants. The link, he explains, is the dialogue between people and their environment: “How do we initiate that through the design process, and how do we keep it going?”

Palti is based in Tel Aviv but he travels a lot, spreading the word at events and through collaborations such as Urban Thinkscape with Temple University, a playground designed to stimulate interaction and learning in west Philadelphia. As well as a think tank — The Centre for Conscious Design — he has set up a design practice, Hume, which applies insights from its in-house Human Metrics Lab on projects as a proof of concept. He is a graduate of the Bartlett School of Architecture at UCL and works with institutions including Harvard, Brookings, ANFA and the Centre for Urban Design and Mental Health. “I don’t really split my time — the boundaries between my professional and personal interests and the different activities I do are very fluid and blurry. I’m interested in what I can offer to make a positive impact in the world and I guess that materializes in my work.”

Palti’s ambition is sweeping social change, but it’s very much a movement rather than a one-man crusade: “I would like to change the way that we build, or I would like to at least contribute to the cultural change that needs to happen in order for us to have the right set of priorities. The more I succeed the better, but I can’t do it alone, for sure.”

“Architects come into the world with a sense of social agency, but it dissipates. They become an agent of their client, often unwillingly, rather than an authority that questions whether a project will have a positive impact”

He has, he admits, a love-hate relationship with architecture as a profession. He knew he wanted to be an architect when he was as young as 12 — “I was curious about it, I probably felt that it would keep me interested” — and has never seriously considered doing anything else. But he quickly became disillusioned with a profession that slavishly perpetuates the work of starchitects and proposes answers rather than asking questions. “I think there’s a humility that perhaps it has forgotten, partly because of the amount of power it has been given in the past.” As that power diminishes in a world that values evidence above intuition, the architectural conscience has become a casualty of an industry that prioritizes profit over people. “Architects come into the world with a sense of social agency, but it dissipates. They become an agent of their client, often unwillingly, rather than an authority that questions whether a project will have a positive impact.”

Asking questions is perhaps one of Palti’s defining traits. He first sought out Professor Moshe Bar, head of the Gonda Multidisciplinary Brain Research Center at Bar-Ilan University, when he was writing his Masters thesis on curiosity.

Why curiosity? “As an Israeli, you are born into an identity intertwined with conflict, often trying to understand your role in the situation: what is it that you can do? So my thesis project aimed to bring together the Jewish and Arab communities in Tel Aviv and Jaffa. When I started looking into empathy, there seemed to be a very strong link to curiosity, as a tool for encouraging people to understand the experience of the other.” Dissatisfied with architectural answers, he went looking elsewhere and became intrigued. “The deeper I went, the more I was drawn into understanding how we can even objectively talk about seemingly elusive topics like curiosity and empathy.”

Palti believes behavioural science offers architecture a way to rediscover its lost agency. “It gives us really valuable tools to augment or correct our intuition. It offers evidence to inform our decisions but also to back them up in conversations with stakeholders. The fact that architecture didn’t seem to be acting on that was the real source for the manifesto, and all of the work I’ve done since then.”

A conscious design process would be influenced by scientific evidence and by new knowledge about how we interact with each other and our environment. “Design is a decision-making process with many different choice points. By informing those decisions with science, you get a very different outcome because you’re referring to a body of knowledge that you wouldn’t otherwise have.”

For example, our understanding of lighting is maturing from a broad-stroke “daylight is good” to exactly how much and what it’s good for. But how we use that knowledge will depend on the brief: “At the core of a strategic brief lies the value system that informs it. Let’s call it an agreement of intention between the client and architect. So do we design shopping malls without any daylight because that’s what encourages consumption, or do we prioritize the wellbeing of the people and put windows in?”

The next step is to embed smart technologies in the urban environment to collect information about how well a place is performing against human metrics and, more ambitiously, enable it to reconfigure itself to perform better. That might mean dialling down visual stimuli such as advertising or street clutter if the inhabitants are exhibiting signs of stress, adding opportunities for play when children are likely to be present, or stimulating social interactions among older people. 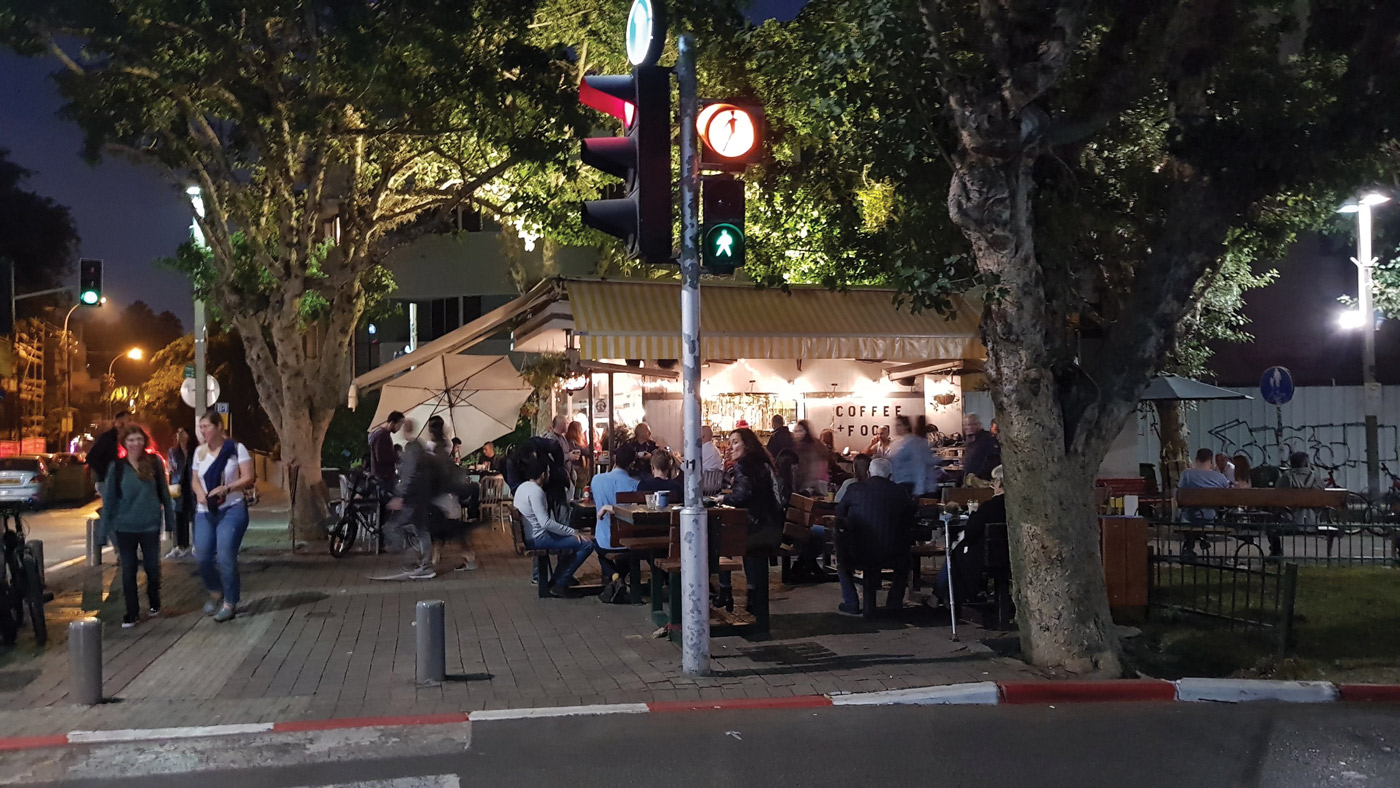 The awareness side is developing quickly — cities already produce and gather a wealth of data about their inhabitants’ locations, routes, habits and emotions. Equipping the physical environment to act on this will take longer. But the biggest obstacle that Palti sees are the cultural values. “I think a conscious city is going to happen because that’s where technology is leading us. But technology has a way of guiding human behaviour to bad habits. If we continue to prioritize economic growth over human wellbeing or planetary health, those are the values that the Conscious City will perpetuate.”

Urban Thinkscape is the most complete example of the Conscious Cities approach so far. Palti was contacted by Kathy Hirsh-Pasek at Temple University, a pioneer of “playful learning”, which uses the science of play to improve learning outcomes. Realizing that children spend only 20% of their waking time in school, she wanted to create a place that would stimulate curiosity and interaction. “What especially drew me to that project is that it has a very strong focus on impact assessment — on understanding whether what we did was effective or not, using indicators related to healthy child development.

It had everything that Conscious Cities talks about: informing the design process through science but also creating a dialogue between environment and user so that the environment can keep improving itself.”

At its most dystopian extent, what’s to stop a Conscious City turning on its inhabitants, like Terminator’s Skynet or the Matrix? “I think it’s a very healthy fear for us to talk about. There’s definitely a dystopian aspect to it because we’re talking about control a lot of the time.”

The video introduction to Conscious Cities begins with Frankenstein for a very good reason, he says, “because if you don’t know what you’re giving life to, you’re unlikely to know how your interaction with it is going to be. In a way, Conscious Cities was set up so that we’re not entering the future blindly, but actually asking what kind of consciousness we’re creating. A lot of the time, it ends up being a critique of smart cities that are not guided by values but by innovation or technology in itself. It’s our responsibility to start asking why we’re doing it, and if we’re doing it right.”